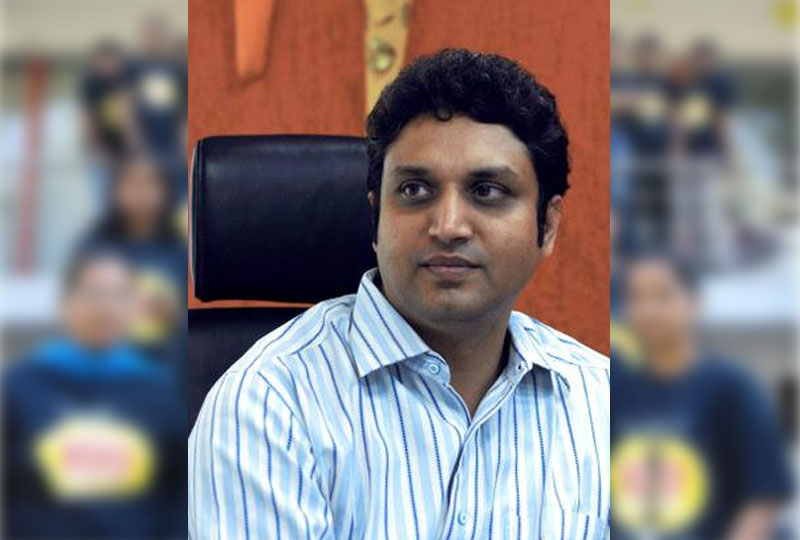 Causing an effect, from Odisha to Kenya

Sometimes it is important to believe in your dream and pursue it. Everybody is given a chance in life. Success weds those who identify it and pursue it,” says Sriram, a first-generation entrepreneur, who is now creating waves in faraway Kenya with his Internet and digital media projects.On October 30, 1999, a super-cyclone had battered Odisha. In Hyderabad, a restless young man woke up the next morning with an idea.

He launched Cause an Effect. It was all about providing relief to those affected by a calamity. He could muster support from 18 corporates. On the Web site, every time somebody clicked on ‘save a life,’ र 9 was credited (50 paise from each company) along with the person’s contribution to a relief fund.

Soon, it gathered momentum. He reached out to the media from a cubicle in a cybercafé. There was no stopping. By the fifth day, a group of kids from Austin, Texas, wrote asking where to send the $100 it had raised.

“We put this e-mail on the Web site — it had a viral effect. In 45 days, we raised र 7.5 crore from 18 million people. Over days, cheques in gunny bags were sent to the then Andhra Pradesh Chief Minister’s office towards helping the affected in Odisha,” says Sriram Bharatam, an engineer and the one who dreamt of the idea.

This effort using the power of the Internet also helped build a global community of millions in no time, says Sriram. It brought him global recognition in the form of the Kauffman Community Award for social entrepreneurship in 2004.

Today Cause an Effect is a non-government organisation focused on sustainable livelihoods. It did its part in providing relief to those affected in India by the 2004 tsunami. The Nasscom Foundation uses its example for training people in alternate livelihoods.

“Sometimes it is important to believe in your dream and pursue it. Everybody is given a chance in life. Success weds those who identify it and pursue it,” says Sriram, a first-generation entrepreneur, who is now creating waves in faraway Kenya with his Internet and digital media projects.

Sriram comes from an orthodox family, where the appetite for risk taking was the least. He studied mechanical engineering and then software engineering. An MBA followed. A gold medallist throughout, he joined HCL-Hewlett-Packard, at that time his dream company. The offer was to sell computers.

“I said no and wanted to do software. They put me in HR,” says Sriram. Three months later, Sriram developed the first e-commerce solution for the company, as well as SAP. He was picked as an ‘intrapreneur’ (out of the 2,500 youngsters) and asked to work with GNIIT.

A stint at the Massachusetts Institute of Technology, US, for an entrepreneurial programme called ‘Birthing of Giants,’ where they pick 60 entrepreneurs every year globally, gave the much-needed boost. These entrepreneurs have a story, are small, but have it in them to grow and make it big.

Cause an Effect has proved to be his turning point to as a social entrepreneur. He started iridium Interactive in 2000 with his chartered-accountant wife Bharathi. “We again started from the same cybercafé called Cyber Spice in Hyderabad. Took space and in fact partnered with him (the owner) to hire three cubicles. ITC was the first client, then came Escorts and Maruti, and it grew,” he says.

The focus was on solving business problems through digital media. “In 2001, I met Naresh Trehan, who was then with Escorts Hospital in New Delhi. He said 80 per cent of the time doctors spend on educating patients. We produced animation films on balloon angioplasty, created a Web site, wherein people could log on and get many simple solutions.” In the last decade, iridium Interactive has been working on several ideas, including a Web site for the blind, which has been recognised among the top 100 innovations by Nasscom. It employs 150 people in India, the US, Kenya and in a few countries in Europe.

The desire to explore new avenues took Sriram to Kenya. It all started after his visit to East Africa with Nasscom in 2010. In Kenya, 80 per cent of transactions done are through Vodafone’s Safari.com. Further, 70 per cent of the 40 million citizens are connected through M-Pesa.

With high Internet and mobile penetration in Kenya, Sriram saw an opportunity to offer solutions to small and medium enterprises there. So he started Kuza Biashara, which in Swahili means ‘grow your business,’ in 2011. The Kenyan venture is self funded. It benefits about 15,000 small business owners.

Today, it has 55 Kenyans working and is present in 20 locations. The focus is on capacity building for small business owners. These people “don’t know what they don’t know.” For example, they don’t know how to hire employees, take a bank credit, network in conferences, or prepare a balance sheet. 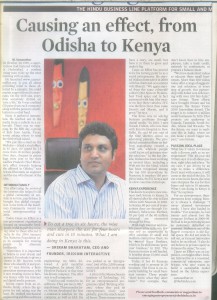 “We have made short videos to educate these small businesses. More than 300 videos today offer a range of suggestions and solutions, at every step of growth. Our partnership with Safari.com is flowering with over 100 hits daily,” says Sriram. These efforts have brought Sriram and his company the Kenya Vision 2030 Innovation Award. The target is to connect a million small businesses by 2015. Pilot projects are underway in Uganda, Tanzania, South Sudan, Ghana and Rwanda. “In the future, we want to replicate this in India, where we can make a much bigger impact,” says Sriram.

What has it taken to traverse such a diverse path as an entrepreneur? The 40-year-old Sriram says it is all about passion, right idea and place. “In my case, I am driven by an urge to make a difference. Don’t start with money, it will come at the end of the day. To cut a tree in six hours, the wise man sharpens the axe for four hours and cuts in 10 minutes. What I am doing in Kenya is this,” he explains.

For an entrepreneur, thunderstorms keep coming. Money is always a challenge. “I never planned investment needs. I have also landed in trouble.” For example, he lost money and almost lost the company iridium Interactive in 2008-09. He had to let go 100 employees as customers defaulted on payment. iridium Interactive is one of the biggest companies in the digital space. He did not want to sell out, as it meant innovation had to be sacrificed. “I also do not believe in private equity as it means the same,” he says.

Cause an Effect was an impulsive, overnight effort. iridium Interactive is a reasoned, commercial enterprise, says Sriram, who now wants to build a sustainable model based on the Africa experience. 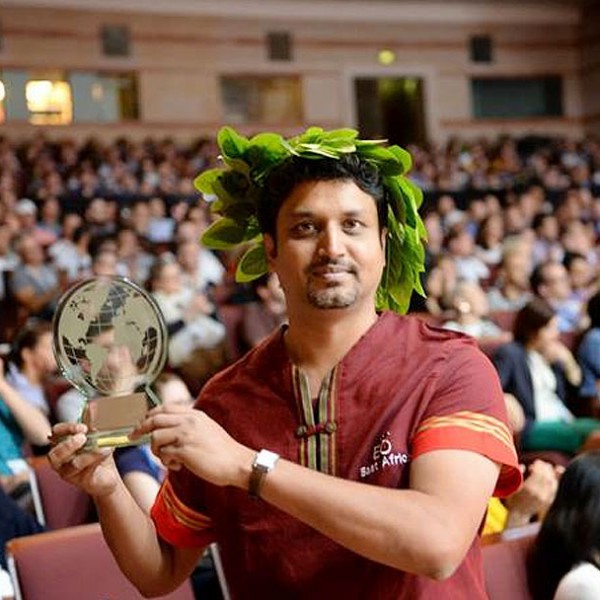 The Entrepreneurs’ Organization (EO) is a global network of more…

Continue reading...
1 Discussion on “Causing an effect, from Odisha to Kenya”